(Salt Lake City, UT) — Today at an awards ceremony, the Interstate Renewable Energy Council (IREC) honored the winners of its annual 3iAwards, a prestigious national search for best of 2019 in Innovation, Ingenuity and Inspiration in renewable energy and energy efficiency. IREC’s 2019 Energy Heroes also were honored.

“I can make a whole room go silent,” said 13-year-old IREC Energy Hero Haven Coleman. “At school I can’t do that, but at a utilities board, I can.”

Just back from the U.N. youth climate summit in New York, and featured on MSNBC, the Denver-based climate activist addressed award ceremony attendees with an impassioned plea: “I want adults to start acting to  enact the system changes that are needed,” said Haven. “I want them to fight climate change and stop the worst effects of it, so I can go back to being a kid.”

Haven has been at it since she was 10.

Inspired by Greta Thunberg and the youth climate movement in Europe and Australia, she co-founded the equivalent in the U.S., the US Youth Climate Strike. Her work caught the attention of former Vice President Al Gore, who invited her to be part of his “24 Hours of Reality” project, a day of television programming centered on climate change.

“Our 3iAward winners and IREC Energy Heroes represent the nation’s most extraordinary people, projects and programs, creating replicable solutions to today’s complex renewable energy and energy efficiency challenges, one state and one community at a time,” said IREC Board Chairman Larry Shirley. “Our honorees exemplify the higher goals we need to achieve to make a clean energy future possible, and they are changing our national energy landscape in the process.”

IREC’s 3iAward winners for Best of 2019 include: 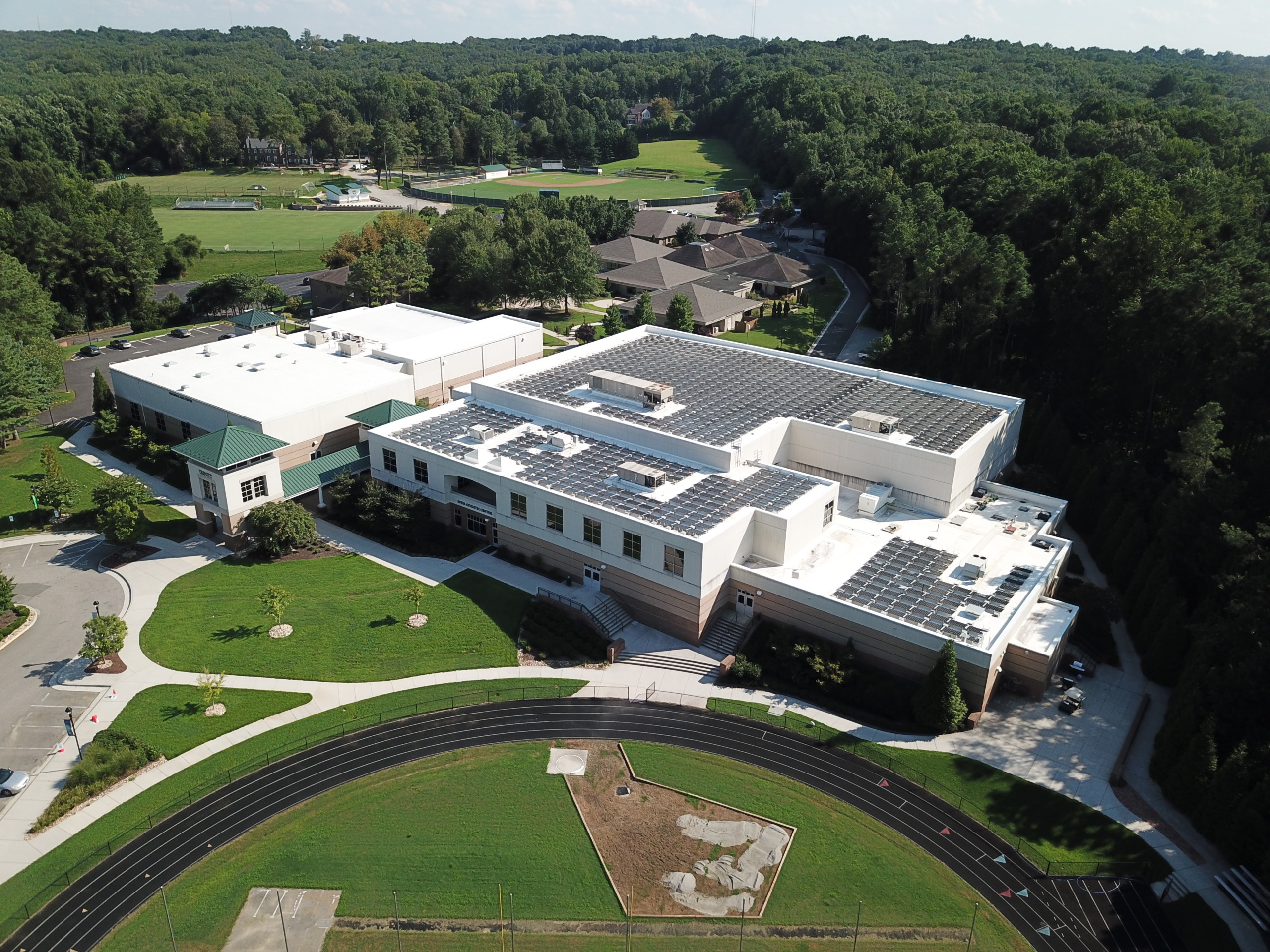 Fellowship Energy for Best Community Shared Renewables Project
Most of the half-million faith-based properties in the U.S. have been widely excluded from the renewable energy revolution, as traditional financing methods are not suitable  to provide clean energy technologies to these entities. Fellowship Energy created an innovative financing solution so these properties could go solar without upfront costs.

The financing model brings best practices and credit enhancement tools from other economic sectors to religious organizations and other non-profits. It enables them to reduce expenditures on utility bills so they can dedicate more funds to their higher mission. 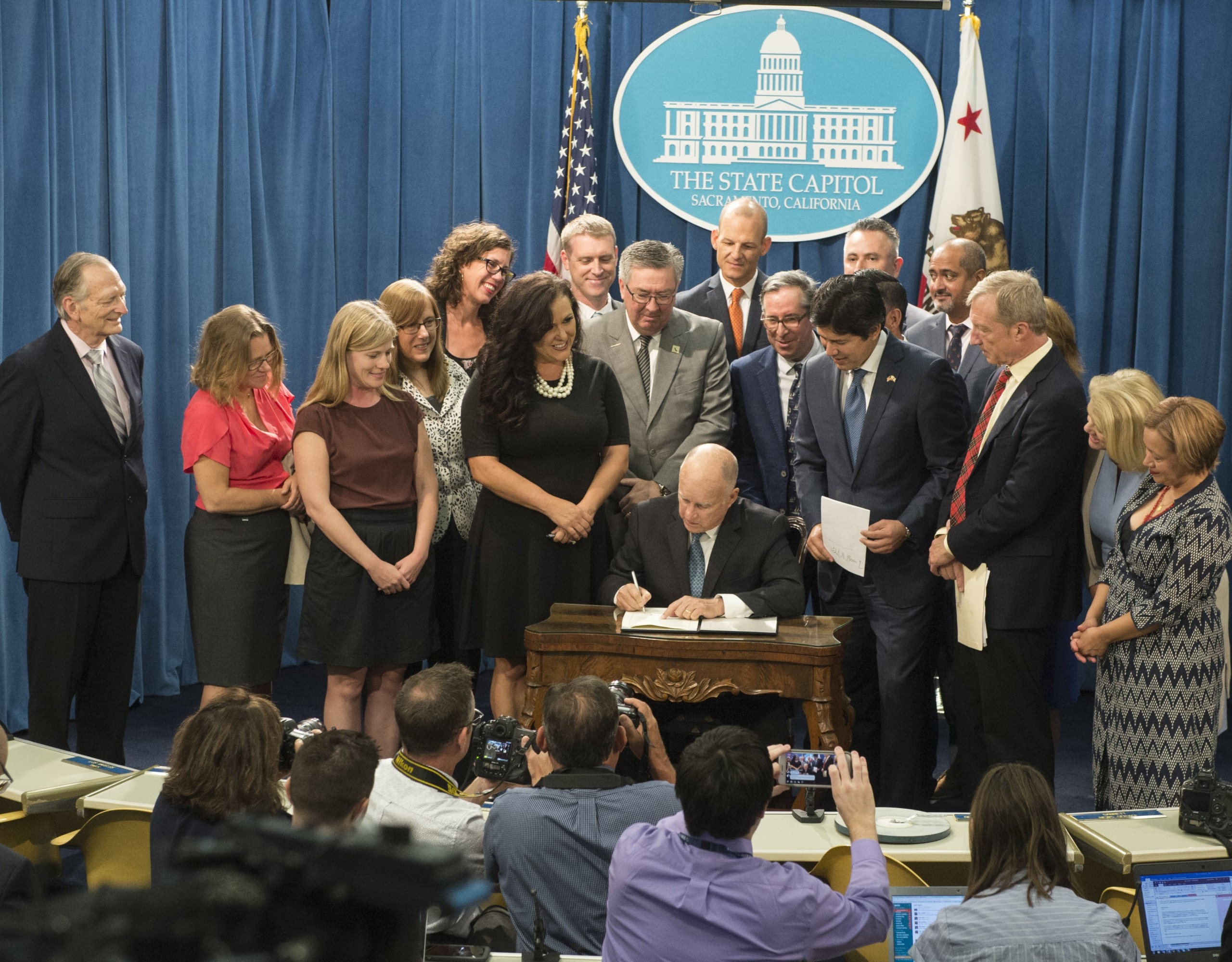 SolSmart for best State and Local Government Initiative (a shared award):
The Solar Foundation and Metropolitan Mayors Caucus & Greenest Region Compact
SolSmart is a national designation program recognizing communities that make it faster, easier and more affordable to go solar. Led by The Solar Foundation (along with the International City/County Management Association), SolSmart was created in 2016 and now boasts more than 275 cities, counties and towns that have achieved the SolSmart designation. 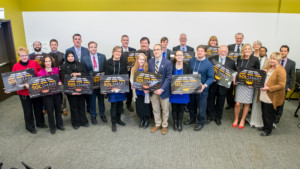 One of the initiatives of the Metropolitan Mayors Caucus, representing the Chicago region’s 275 cities, towns and villages, is the Greenest Region Compact (GRC), which now includes 119 municipalities and two counties, serving at least six million residents in the greater Chicago area. Consensus goals of the GRC support mayors in their role as environmental leaders. Through its work as a SolSmart advisor, the Caucus led 35 local governments to earn the SolSmart designation, more than any other state. 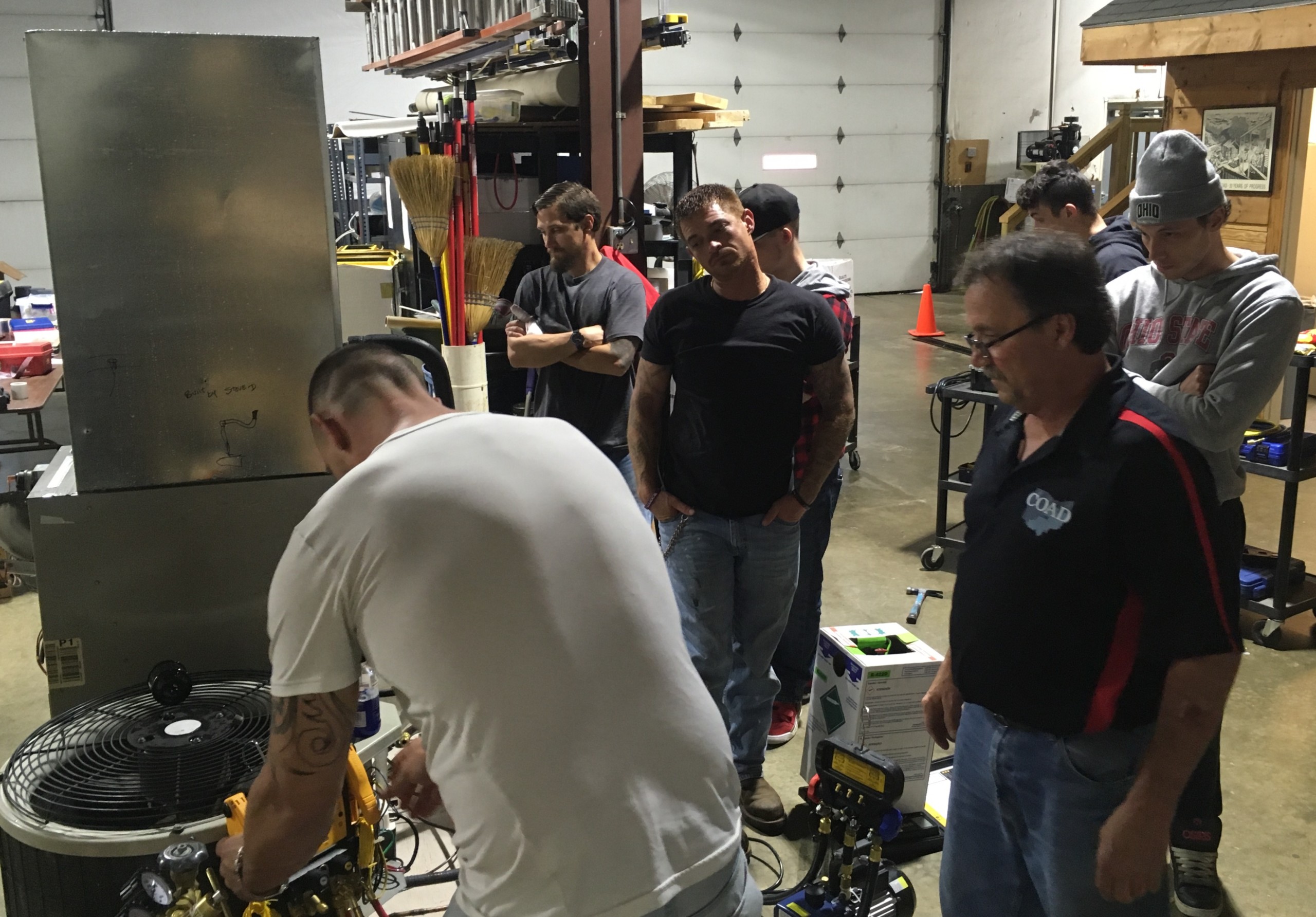 In the past years, 187 classes were provided. Students and professionals included private contractors, utilities, community colleges, staff from affordable housing, environmental and energy conservation non-profits, and other training organizations. 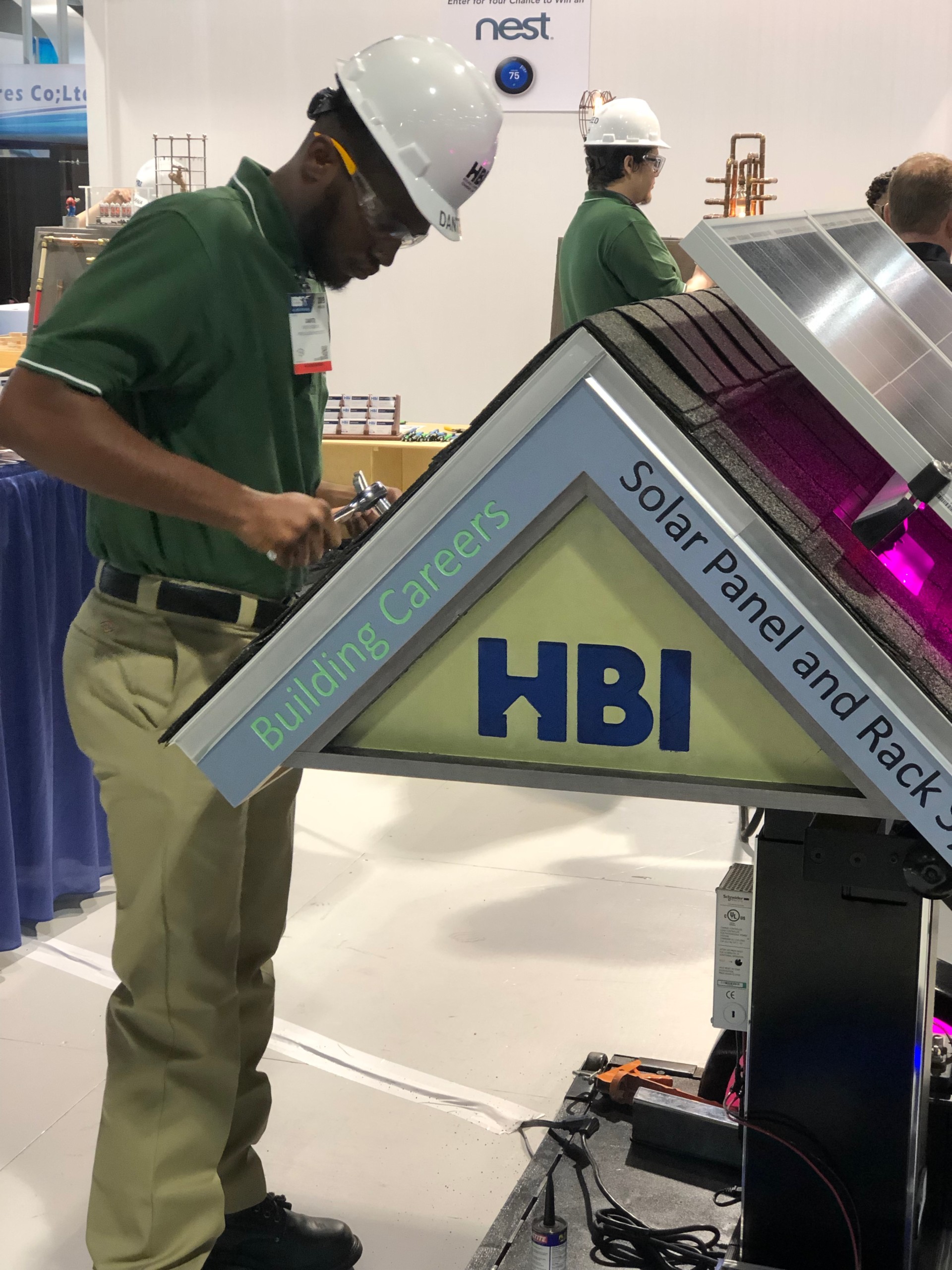 Home Builders Institute/Job Corps
There are an estimated 4 million at-risk youth in America — 16- to 24-year-olds who are neither in school nor working. At the same time, there is a shortage of skilled, qualified  solar workers.

The potential for clean energy jobs to pave a pathway out of poverty is long recognized, but a mismatch between training and jobs has led to frustratingly low employment outcomes.

Through an innovative partnership, HBI and IREC developed a solar-specific, employer-recognized certification focused on residential rooftop PV safety and weather proofed installation of structural components. Now a national model designed to bridge the gap between at-risk youth and solar jobs, the solar training-to-jobs pipeline is based on hands-on, experiential training and valid credentials, both aligned with solar sector employer needs.

HBI has partnered with Job Corps for more than 40 years to prepare and place young people in building industry careers — committed to changing lives for the diverse populations it serves. 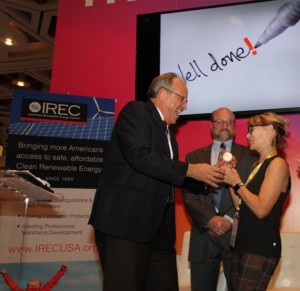 Calling her a beloved ambassador for solar, IREC’s own Jane Pulaski, fondly known as JP, was honored for 27 years of passionately impacting our clean energy future. An integral member of the IREC communications team for nearly three decades, she plans to retire at the end of the year.

Jane is most comfortable with supporting those on stage.  She is often quietly in the background.  She makes sure that news is noteworthy and other people get to take their bows. Yesterday, she was among those applauded as an IREC Energy Hero – a full standing ovation spotlight she richly deserves.

“I would say with certainty that Jane Pulaski is one of the most loved people in the solar energy field,” said Jane Weissman, former president and CEO of IREC, who worked with JP for most of those 27 years. “People are the foundation for change. Jane Pulaski is also a pillar.”