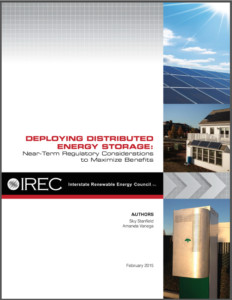 Since the market for distributed energy storage is still in its infancy, there is a significant need for regulatory guidance and proactive policies to ensure a smooth integration into the existing electrical system. A report released today by IREC offers independent insight on how to address these new challenges—and opportunities—in the regulatory arena.

As the percentage of electricity generated from renewable energy sources continues to grow in the U.S., particularly from solar photovoltaic (PV) systems, technologies that can facilitate increased deployment of renewable energy, such as distributed energy storage, are front and center in state and national discussions.

“Distributed energy storage has enormous potential to be a vital tool for states that seek to expand the use of renewable energy, while also offering additional services that can broadly improve the quality and efficiency of the electric service provided by utilities,” says lead report author Sky Stanfield, who represents IREC in regulatory matters. “IREC developed this report to help identify key regulatory changes that states may want to consider in the near term in order to facilitate rollout of distributed storage in a manner that captures the greatest benefits and promotes a healthy market for storage services.”

Technologies such as distributed storage could lower costs and improve the quality of electric service. The electric system, however, was not originally designed with large amounts of local generation in mind, and there are important implications that need to be taken into account in order to maintain power quality and reliability.

“The demand for distributed energy storage is being driven by its potential to help address many of the challenges that are arising as the electric system in the United States undergoes some of the most significant changes it has experienced in the last 100 years,” explains IREC President/CEO Jane Weissman.

Energy storage could offer additional benefits to customers, both by helping them directly manage their energy use and offering distribution system managers new tools to help maintain and even enhance the functionality of the electricity system. Because it has the ability to address a wide range of potential issues—including renewable energy integration, variability management, peak management, voltage and frequency regulation, grid resiliency, and energy management—distributed storage is gaining attention from customers, utilities and regulators.

At low penetrations, issues associated with the integration of distributed renewable energy resources can likely be managed with existing grid management technologies and techniques, without the need for significant regulatory changes. However, as penetration levels grow, more significant regulatory changes and modifications to the grid may be necessary.

In this report, IREC identifies six key near-term regulatory policy considerations to help regulators, utilities, ratepayers and states as they evaluate and seek to capture the greatest benefits of distributed energy storage.

The report outlines why regulators should be interested in helping establish foundational policies to enable deployment of distributed storage. Building on this discussion, it then discusses the specific uses and benefits of distributed storage, and looks at the nature of current state policy efforts to address distributed energy storage in the United States. Finally, taking those insights into account and building upon the research regarding the potential applications, it provides six key policy considerations

“The goal is not to identify the specific policy decisions that should be made, but rather to highlight the key areas where regulations may need to be created, clarified or updated in the near term,” explains Stanfield.

As states begin to take action, IREC will continue to keep regulators informed about the lessons learned by other states and will help to identify best practices as they emerge to ease the learning curve for states.