Once again, the Small Wind Conference has lived up to its reputation as the premier small wind event in the United States, with people attending from all across the United States, as well as Canada, Denmark, England, France, Italy, and Scotland.

Tuesday began with a keynote address by Dan Juhl, Juhl Wind and Juhl Renewable Energy Systems, from Minnesota.  Dan began by paying tribute to Elliott Bayly, who passed away early this year.  Elliott was one of the pioneers of the small wind industry, beginning his career by developing the first off-grid wind powered radio station in the US, KFMU in Steamboat Springs, Colorado.  Elliott went on to develop three completely different wind turbine designs: the Whirlwind, the Whisper series, and the Ventera, along with their associated companies.   Dan followed this with an excellent  review of how small wind got to where it is today, and advice as to where the industry might be headed in the future.

Following Dan’s excellent keynote address, 46 presenters delved into a variety of issues of interest to wind installers, from wind resource assessment and siting lessons to turbine testing and results to Michigan’s landmark small wind court case and permitting issues.  Jennifer Jenkins, Executive Director of the Distributed Wind Energy Association, gave a detailed update of the state of DWEA and unveiling opportunities for the small wind industry to get involved in its own trade organization.  Tuesday’s culmination was reception in the Exhibition Hall, featuring two demonstrations:  one by Honeywell Miller Protection Equipment and the other by Talco on the Gaia wind turbine.

Day two of the Small Wind Conference began with a breakfast for the Women of Wind Energy.    Wednesday featured more presentations, punctuated by the annual small wind awards ceremony. 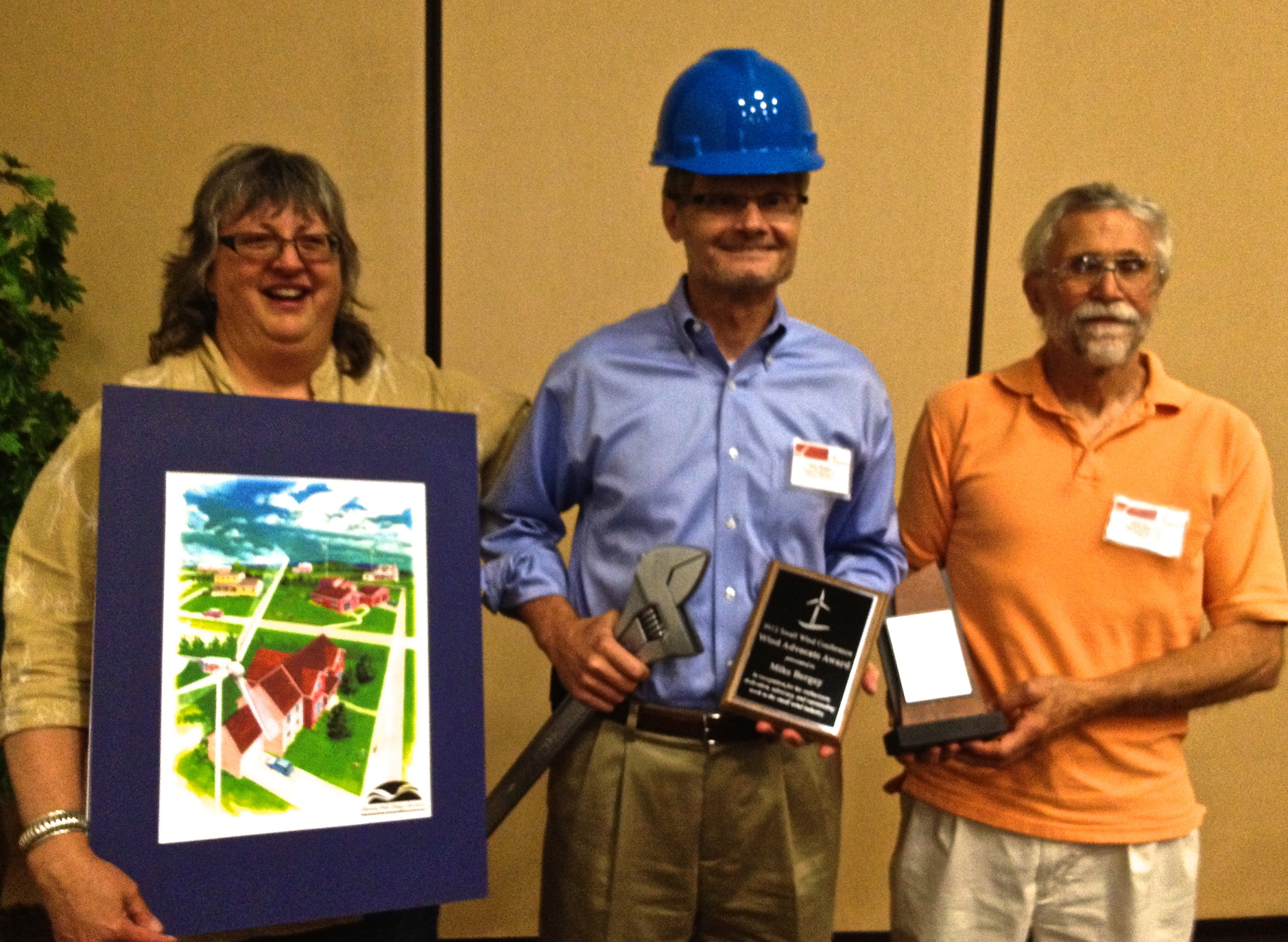 This year’s Small Wind Advocate Award went to Mike Bergey of Bergey Windpower [center, pictured with Trudy Forsyth, left, and Mick Sagrillo, right], who was recognized for his enthusiasm, dedication, advocacy, and decades of outstanding work in the small wind industry, as conference participants gave him a standing ovation.  In addition to the Small Wind Advocate Award, Mike was presented with the original cover artwork from the 2002 AWEA Small Wind Roadmap.  Attendees were invited to sign the matting with their best wishes for Mike.  In addition, Mike was presented with an award by Larry Sherwood of the Small Wind Certification Council for his efforts to establish that organization as a certifying body for small wind turbines. 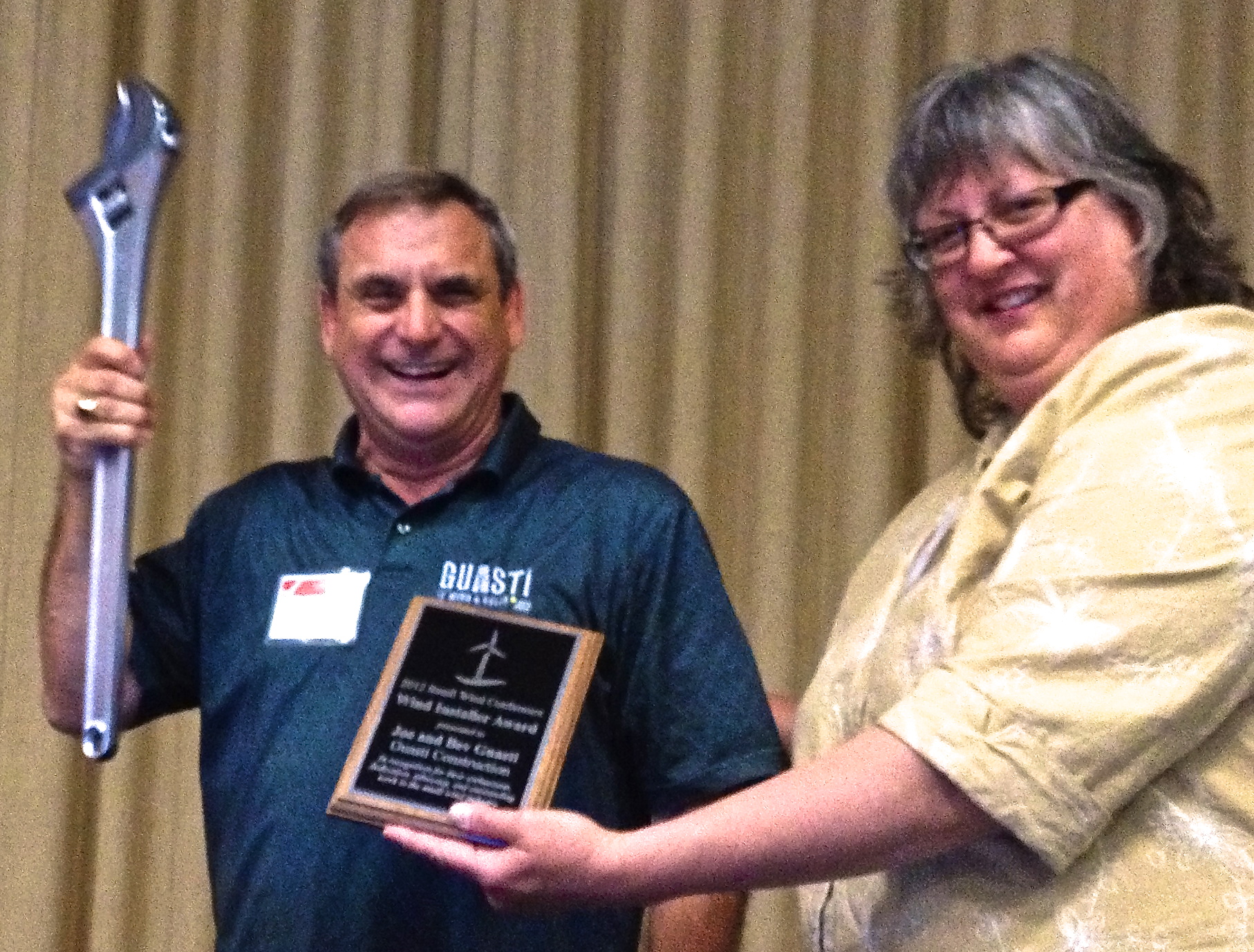 The Small Wind Installer of the Year went to Joe and Bev Guasti, of Guasti Construction in California for their extensive efforts to advance the interests of small wind. For several years, Joe and Bev worked to change the state and local county permitting rules and fees for installing small wind turbines.  Joe and Bev subsequently sold and installed more than 200 wind turbines, dominantly in one CA county.  In the picture to the right, Joe Guasti, with the token Small Wind Conference wrench, is presented with the Small Wind Installer of the Year Award by Trudy Forsyth. Besides their awards, both Bergey and the Guastis were presented with the token (but gigantic) wrench, the symbol of all small wind installers and advocates.

This year saw 16 sponsors help offset the cost of the Small Wind Conference.   Twenty one, from manufacturers to component suppliers to consultants and site assessors, answered questions about their businesses from attendees . Our sincerest appreciation goes out to all sponsors and exhibitors for helping to make the conference the success that it was. The participants enjoyed a networking and educational event second to none in the small wind world.

In addition to the two-day Small Wind Conference, a flurry of other events took place during the conference week.   Thursday morning, the Distributed Wind Energy Association held its annual meeting open to the public, discussing organization development issues as well as opportunities for attendees to advance policies to help further the interests of the small wind industry.   The Board of Directors of the Small Wind Certification Council met on Thursday afternoon.  On Friday morning, Dr. Rob Wills small wind’s NEC representative, Robert Preus, and Troy Hewitt of Intertek discussed proposed changes to Article 694  of the National Electric Code with a group of installers.

Finally, the Midwest Renewable Energy Association’s 23rd Energy Fair, the largest renewable energy and sustainable living event on the planet, educated and entertained all for the long weekend after the Small Wind Conference.

The Small Wind Conference Coordinating Committee would like thank all who exhibited, participated, and helped with the event, especially our sponsors which included:

Plans for next year’s Small Wind Conference at the Holiday Inn Convention Center in Stevens Point, Wisconsin are being developed now. Keep your calendar open for Monday to Wednesday, June 17-19, 2013.