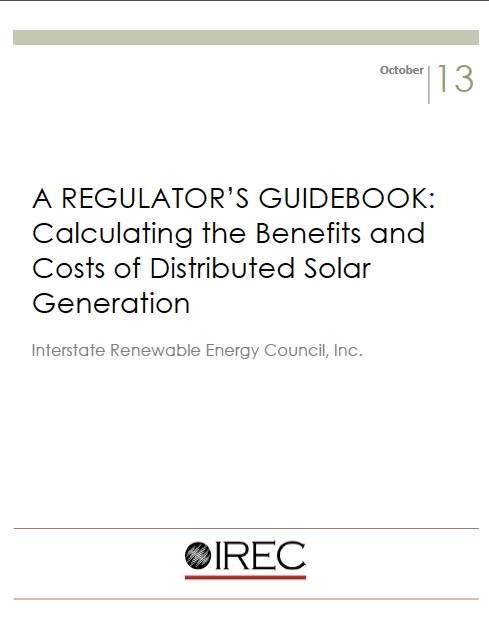 There is an acute need for a standardized approach to determining the benefits and costs associated with distributed solar generation (DSG), say the authors of a report released today by the Interstate Renewable Energy Council (IREC).

A Regulator’s Guidebook: Calculating the Benefits and Costs of Distributed Solar Generation offers lessons learned from 16 regional and utility-specific DSG studies summarized in a recent review by the Rocky Mountain Institute (RMI), and then proposes a standardized valuation methodology for public utility commissions to consider implementing in future studies.

Why is this important?

Throughout 2013, a steady flow of reports, news stories, workshops and conference panels have discussed whether to reform or repeal net energy metering (NEM), the bill credit arrangement that allows solar customers to receive full credit on their energy bills for any power they deliver to the grid.

The calls for change are founded on the claim that NEM customers who “zero out” their utility bill must not be paying their fair share for the utility infrastructure that they are using, and that those costs must have shifted to other, non-solar customers. Only a thorough benefit and cost analysis can provide regulators with an answer to whether this claim is valid in a given utility service area, suggest report authors Jason Keyes and Karl R. Rábago.

“As the simplicity and certainty of NEM have made it the vehicle for nearly all of the 400,000+ customer-sited solar arrays installed in the United States, changes to such a successful policy should only be made based on careful analysis,” says Keyes, who represents IREC before state utility commissions. “This is especially so in light of a body of studies finding that solar customers may actually be subsidizing utilities and other customers,” adds Rábago, who sits on IREC’s Board of Directors.

As DSG system prices continue to fall and this energy resource becomes more accessible, regulators, utilities and other stakeholders are increasingly interested in investigating its benefits and costs. “Understandably, regulators seek to understand whether policies, such as net energy metering, put in place to encourage adoption of DSG are appropriate and cost-effective,” says Keyes.

As RMI’s meta-study shows, recent DSG studies have varied widely due to differences in study assumptions, key parameters, and methodologies. A stark example came to light in early 2013 in Arizona, where two DSG benefit and cost studies were released in consecutive order by the state’s largest utility and then by the solar industry. The utility-funded study showed a net solar value of less than four cents, while the industry-funded study found a value in excess of 21 cents.

“Valuations vary by utility,” says Rábago, “but valuation methodologies should not. “The authors contend that standard methodology would be helpful as legislators, regulators and the public attempt to determine whether to curtail or expand DSG policies.

The report suggests standardized approaches for the various benefits and costs, and explains how to calculate them regardless of the structure of the program or rate in which this valuation is used. Whether considering net energy metering, value of solar tariffs, fixed-rate feed- in tariffs, or incentive programs, parties will always want to determine the value provided by DSG. The authors seek to fill that need, without endorsing any particular DSG policy in this report.

“With solar becoming a widespread, affordable option for more and more Americans, regulators and utilities are increasingly focused on assessing the impacts of this dynamic and growing energy resource,” says Annie Lappé, solar policy director, Vote Solar. “Correctly assessing the net impact of rooftop solar is imperative, as cornerstone polices encouraging the deployment of this resource, such as net metering, face increasing scrutiny from utilities. This report offers our country a standardized approach to evaluation that Vote Solar fully endorses,” she adds.

“Without question, distributed generation provides significant benefits to consumers nationwide. IREC’s guidebook offers critically important new tools for regulators, allowing them to make informed, effective decisions for their constituencies and ratepayers,” says Carrie Cullen Hitt, senior  vice president of state affairs for the Solar Energy Industries Association (SEIA). “Most importantly, SEIA is supportive of recommendations by IREC for a more standardized and thorough approach for valuing DG,” she adds. “This is something sorely needed and long overdue.”

Download A Regulator’s Guidebook: Calculating the Benefits and Costs of Distributed Solar Generation