The solar market, while relatively young, is an increasingly important part of the American economy.  My latest IREC report, U.S. Solar Market Trends 2011, answers important questions about the solar market. What are the trends in the market, and what forces are at work? Which sectors of the market are strongest, and why? What are the prospects for solar energy in the near future?

2.  Installations are concentrated in a few states 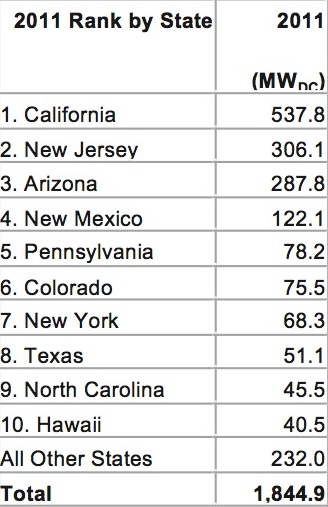 3.  Utility-sector PV installations more than doubled in 2011 compared to 2010

The utility sector’s share of all U.S. grid-connected PV installations grew from virtually none in 2006 to 15% in 2009, to 32% in 2010, and to 38% in 2011. Of the 10 largest PV installations in the United States, five were installed in 2011. The two largest U.S. PV installations installed in 2011 were the 49-megawatt DC (MWDC) Mesquite Solar 1 Plant in Arlington, Ariz., which supplies power to Pacific Gas and Electric Co. customers in northern California, and the 35-MWDC plant in Webberville, Texas, which supplies power to Austin Energy.

4.  The average size of non-residential distributed installations is increasing

Federal tax credits and cash grants are an important financial component of most installations. State policies affect PV installations, with most installations happening in the few states with favorable solar policies. Though their impact on the total market is declining,financial rebates have historically been the most important state policy initiative, especially for smaller installations. State renewable portfolio standards (RPSs), which mandate that utilities generate a percentage of their power from solar or other renewable sources, tend to encourage larger installations. These are fast becoming the most important state policy tool. Installed PV costs are declining and there are now a few markets where PV costs compete with electricity prices.