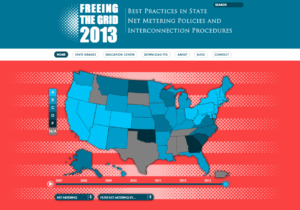 On October 23, 2013, the Vote Solar Initiative (Vote Solar) and IREC announced the 2013 results of Freeing the Grid, a report that grades all 50 states on two key policies: net metering and interconnection procedures. Together, these policies empower American energy consumers to use rooftop solar and other small-scale renewables to meet their own electricity needs. The report was released during Solar Power International, North America’s largest solar trade show.

“Effective energy policy and a hefty dose of ingenuity have achieved something remarkable: renewable resources are now at the scale and cost necessary to allow them to be a real and growing part of our energy landscape. Families, schools and businesses are going solar in record numbers nationwide, even as incentives decrease. Now that we’ve built this new energy economy, it’s critical that we keep the way clear for Americans to keep going solar with strong net metering and interconnection policies,” said Adam Browning, executive director of Vote Solar.

“This is an exciting transition as renewables edge closer to mainstream status.  However, policy design on the frontiers of our fast-changing clean energy marketplace can be a challenge to get right. Freeing the Grid helps policymakers and other stakeholders make better sense of best practices and what needs to be done in their own state to clear the way for a 21st century approach to energy,” said Jane Weissman, IREC president and CEO of IREC.

Now in its seventh year of production, Freeing the Grid is designed to help state policymakers, regulators, advocates and other stakeholders easily understand and improve the pillars of our new energy economy. Freeing the Grid’s grading methodology was also adopted for use in the U.S. Department of Energy’s SunShot Initiative, which aims to reduce the cost of going solar by 75% before the end of the decade.

The Vote Solar Initiative is a grassroots non-profit organization working to combat climate change and foster economic development by bringing solar energy into the mainstream.www.votesolar.org