Easing the Transition: The Changing Roles of Consumers, Utilities and Regulators Within the Regulatory Compact 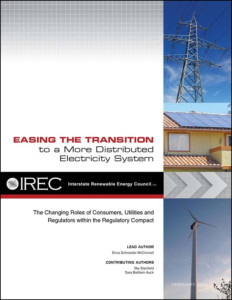 Multiple compounding factors are driving national movement toward a more modern electricity grid, one that enables a cleaner energy future. A thought-leading report released today by the Interstate Renewable Energy Council (IREC) offers a unique look at easing that transition, and offers five insightful approaches for state utility regulators who, ultimately, will facilitate this transition through the rules and regulations that govern the electricity system and electric utilities.

A modern grid will allow for increases in the amount of clean energy produced and universal consumer access, including through distributed generation, for example on-site solar or wind power. It must also include integrated resource planning, two-way flow of energy and information, and increased reliability, security and resiliency, according to IREC.

“As states, utilities and regulators face new demands on an aging electricity system and regulatory framework, there is a strong rationale for updating the ‘regulatory compact’ – the theoretical concept that underlies the laws, regulations and rules that govern the electricity system and the utilities that power it,” according to lead author Erica Schroeder McConnell, among several experts who represent IREC in regulatory matters. “The process and results will allow more innovative ideas to flourish, while accommodating technological innovation and modern policy goals,” she adds.

“The relative ease of transition for utilities and the electricity grid to a more distributed and clean energy future will depend largely on proactive and meaningful regulatory reforms,” says IREC Regulatory Director Sara Baldwin Auck. “IREC seeks to provide regulators with some practical pathways for consideration as they address the changing roles and interests of customers and utilities.”

New technologies have emerged on the customer side of the electric system, including distributed energy resources (DER), which includes not only distributed generation, but energy efficiency, electric vehicles, energy storage and demand response technologies. These technologies are allowing growing numbers of energy consumers to decrease their electricity demand, to act as energy producers, and otherwise manage their energy usage.

“At the same time, the public has become increasingly concerned about the environmental impacts of electricity generation, especially its contribution to climate change, and negative air and water quality impacts,” adds contributing author Sky Stanfield, who also represents IREC in state and federal regulatory proceedings. “Consumers and regulators are also looking for ways to improve the resiliency of the electric system during severe weather events, which are becoming more common as a result of climate change.”

“Along with the physical system, the regulatory compact must evolve to accommodate new public priorities, changing consumer interests, economic and environmental risks, and transformative technologies,” says IREC President/CEO Jane Weissman. “By re-evaluating and reconsidering their approach, regulators can help to ensure a smooth transition to a new, more modern grid and can help define the role for electric utilities in this new era.”

“The report offers five approaches for state utility regulators to consider, each of which aims to holistically and expediently move toward our modern grid vision, where local, distributed resources play a greater role,” says McConnell.

“The issues discussed in this paper are merely a subset of the various forces currently affecting the electricity system and industry,” says Baldwin Auck. “For example, also putting pressure on the traditional regulatory compact, and utility regulation and business models, are restructuring and competitive wholesale markets, and policies that support carbon reduction and promote renewable energy more broadly.”