The drivers of the booming U.S. solar installation market are addressed in a nationally recognized annual report on solar installation trends released today by the Interstate Renewable Energy Council (IREC). The solar market is an increasingly important and vital part of the American economy. What are the trends in this market, and what forces are at work? Which sectors of the market are strongest, and why? What are the prospects for solar energy in the near future?

The report answers these questions by compiling and analyzing public data on U.S. solar installations by technology, state and solar market sectors.  It offers insight on the major factors affecting the solar market, such as  photovoltaic prices, strong consumer demand, available financing, renewable portfolio standards in some states, and financial incentives from the federal government, states and utilities.According to the report, the capacity of photovoltaic (PV) installations increased by 80 percent in 2012, compared with 2011. And over 50 percent of that capacity was in the utility sector for the first time.

“In 2012, more than 90,000 photovoltaic installations were installed in the U.S. with a total capacity of 3.3 GW. This represents a 75 percent increase over installations completed in 2011,” according to Larry Sherwood, IREC vice president & COO and author of IREC’s Solar Market and Installation Trends Report 2013. “Installed utility sector capacity in 2012 increased by almost two and one-half times compared with 2011 and represents over half of the installed capacity last year,” says Sherwood. Distributed capacity also grew, by a more modest 36 percent. Now in its sixth year, the report covers solar technologies that produce electricity, including PV and concentrating solar power (CSP). 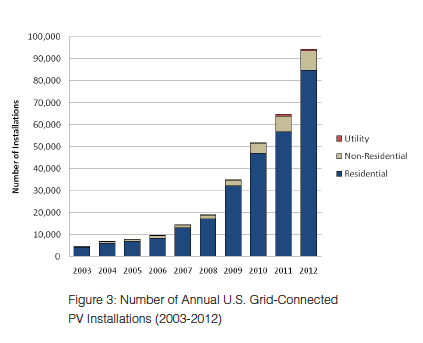 Lower prices and tax incentives increase consumer demand for solar installations. The federal Investment Tax Credit (ITC) of 30 percent provides an important foundational incentive for most installations.  Installed prices for distributed PV installations fell by at least 12 percent in 2012 and have fallen by 33 percent since 2009.  The prices of some individual system components, especially modules, have fallen even more.

Over the near term, the prospect for growth in solar installations is bright. Early indicators point to continued market growth in 2013 due to the federal solar investment tax credit (ITC), continued falling prices, state renewable portfolio standards, and completion of installations begun by the end of 2012 in order to participate in the 1603 Treasury Grant Program. Companies have announced plans for many large solar electric projects, including both PV and CSP projects.

Some of these projects are under construction and will come on-line between 2013 and 2016.

Public data on solar installations help industry, government and non-profit organizations improve their efforts to increase the number (and capacity) of solar installations across the United States. Analysis of multi-year installation trends and state installation data helps these stakeholders learn more about state solar markets and evaluate the effectiveness of marketing, financial incentives and education initiatives.