The full report is available here. State-by-state jobs numbers, including a more detailed analysis of the California, Arizona, and Minnesota solar markets, will be released in February. 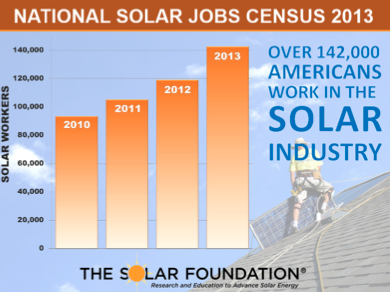 “The solar industry’s job-creating power is clear,” said Andrea Luecke, Executive Director and President of The Solar Foundation. “The industry has grown an astounding 53 percent in the last four years alone, adding nearly 50,000 jobs. Our Census findings show that for the fourth year running, solar jobs remain well-paid and attract highly-skilled workers. That growth is putting people back to work and helping local economies.”

Solar employers are also optimistic about 2014, expecting to add another 22,000 jobs over the coming year. By comparison, over the same time period, the fossil fuel electric generation sector shrank by more than 8,500 jobs (a decline of 8.7 percent) and jobs in coal mining grew by just 0.25 percent, according to the Bureau of Labor Statistics Current Employment Survey (Not Seasonally Adjusted), Sept. 2012 – Nov. 2013.

“The solar industry is a proven job-creator,” said Bill Ritter, former Governor of Colorado and Director of the Center for the New Energy Economy at Colorado State University. “In Colorado and across the country, we have seen that when the right policies are in place to create long-term market certainty, this industry continues to add jobs to our economy.

“SolarCity has added more than 2,000 jobs since the beginning of 2013; every single one in the United States. When you install a solar panel you create a local job that can’t be outsourced,” said Lyndon Rive, Chief Executive Officer of SolarCity. “More than 90 percent of Americans believe we should be using more solar, and fewer than one percent have it today. We’ve barely begun this transformation, but as it advances, the American solar industry has the potential to be one of the greatest job creators this country has ever seen.”

Solar companies are also reporting that cost savings are driving their clients’ decision making, as 51.4 percent of customers report going solar to save money, and another 22.9 percent because costs are now competitive with utility rates. 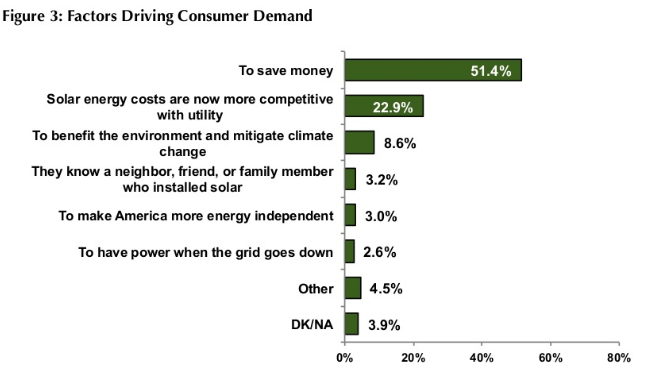 “Tens of thousands of new living-wage jobs have been created over the past year thanks to plunging solar technology costs, increasing consumer demand, and supportive government policies,” said Amit Ronen, Director of The George Washington University Solar Institute.

“As the nation’s fastest growing energy source, we expect the solar industry will continue to generate robust job growth for at least the next decade.”

The National Solar Jobs Census 2013 was conducted by TSF and BW Research Partnership with support from the GW Solar Institute. The report, derived from data collected from more than 2,081 solar firms, measured employment growth in the solar industry between September 2012 and November 2013. The margin of error of this data set is +/-1.3%, significantly lower than any similar national industry study.

“The study shows both aggressive hiring and clear optimism among US solar companies,” said Philip Jordan, Vice President at BW Research Partnership. “Of particular interest was the continued high wages among solar installers, who earned an average of between $20.00 and $23.63 per hour. We also found higher than average employment of veterans in the solar industry, a sign that their high-tech skills are valued in this sector.”

“SunPower is proud to be a global leader in solar power technology and energy services, creating thousands of American jobs and injecting billions into the U.S. economy,” said SunPower CEO Tom Werner. “We employ about 1,000 people at facilities in 10 states, and are actively hiring hundreds more. Our network of approximately 400 dealers employs more than 6,000 across the U.S., and two of our major solar power plants last year created 1,300 jobs at peak construction. Solar is a competitive, reliable resource, and an economic success story for America.”

About The Solar Foundation:
The Solar Foundation® (TSF) is an independent 501(c)(3) nonprofit whose mission is to increase understanding of solar energy through strategic research that educates the public and transforms markets. Since 2010, TSF has published its annual National Solar Jobs Census, which established the first credible solar jobs base line for the U.S. The Solar Foundation is considered the nation’s authority on the solar labor force and advises many organizations on the topic. TSF is also a leading provider of educational materials on the economic impacts of solar for local governments through its work with the U.S. Department of Energy. In addition, TSF chairs the National Solar Schools Consortium, a group of stakeholders seeking to make solar a larger part of the national K-12 system. More at http://TheSolarFoundation.org

About BW Research Partnership:
BW Research is widely regarded as the national leader in labor market analysis for emerging industries and clean energy technologies. BW Research provides high quality data and keen insight into economic and workforce issues related to renewable energy, energy efficiency, transportation, recycling, water, waste, and wastewater management, and other environmental fields. The principals of the firm are committed to providing research and analysis for data-driven decision-making. More at http://www.bwresearch.com