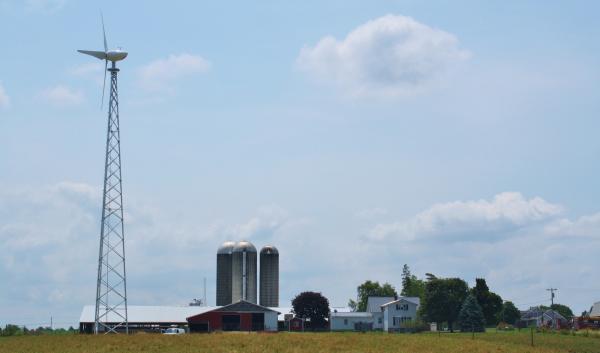 Founded in 1835 by Nathaniel Richmond, Richmond Farms Dairy LLC, is a 220-cow dairy farm operated by Chuck and John Richmond, the 6th and 7th generations of the Richmond family to work the farm. Today, the Richmond Farm is an award-winning dairy farm, situated on 650 acres of land used to grow both corn and hay to feed their cattle.

After attending an open house hosted by Cazenovia Equipment Company (CEC) in 2010, John Richmond decided to investigate renewable energy alternatives for his farm. He wanted a solution that would not only protect him from escalating electricity prices, but one that would allow him to ensure the long term sustainability of his farm, especially for the next generation of Richmonds who would one day operate it.

From Mark Ferrara, Project Manager at CEC, John learned that his farm sat on one of the best wind sites Mark had ever encountered in New York. With a wind regime of 6.2 m/s, there was obvious potential, so John decided to further investigate the purchase of a wind turbine. He wanted to start utilizing and harvesting the natural wind at his farm, instead of regarding it as a nuisance. John states, “I like knowing that I am making my own electricity.” He also states, “The Endurance E-3120 is a great fit for us because it will offset 85% of my electricity consumption on the farm.”

The Richmond Farm’s energy consumption level varies by season, but it typically uses the highest amount of energy in August, when the Richmonds can expect to use about 26,000 kWh and John’s average monthly electricity bill is $1,800. This reflects energy used by machines that milk and feed the cattle. In summer months, the farm also runs 50 fans to keep the cows cool. With this energy consumption level, a 50kW wind turbine was exactly what John needed.

John’s E-3120 was commissioned on August 15th 2012. John states, “The project turned out just as I thought. I’ve locked in my energy costs for the next 20 years with the E-3120 and I feel good about not putting anything bad into the environment, like with the use of coal or nuclear power.” The cost of the project was subsidized with a 39% grant from the New York State Energy Research and Development Authority. John also received a 30% US Federal 1603 tax grant, recently converted into a credit.

When asked about the local response to the turbine, Mary Richmond, John’s mother, replied, “Friends and neighbors are witnessing history in the making. Electric power did not reach this part of North Collins, New York, until 1929!” Now, 83 years later, the Richmond farm has become the first farm in the area to install a wind turbine.

Not only has the Richmond Farm demonstrated a proactive approach to creating a more sustainable future for the next generation of Richmonds by installing a wind turbine, they have become pioneers in their town, being the first to do so while offsetting their energy costs by 85%. Now that’s “green energy that works!”