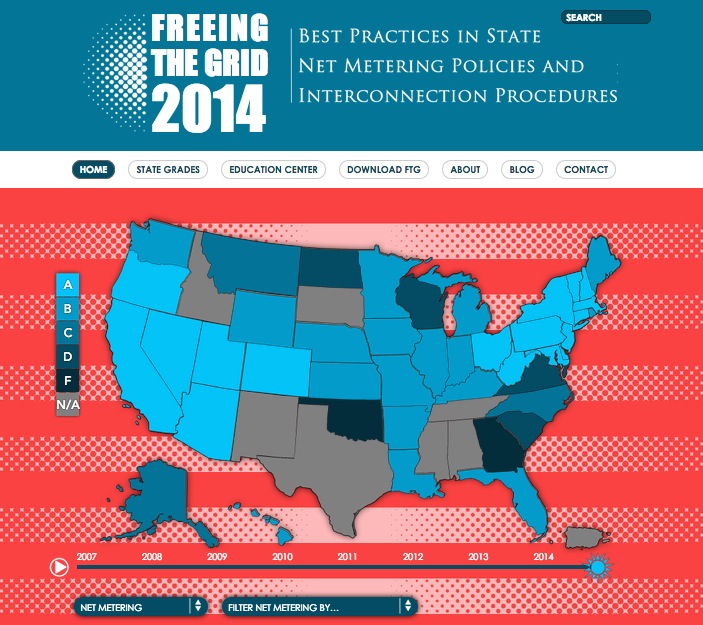 Vote Solar and IREC today released the 2014 edition of Freeing the Grid, a policy guide that grades all 50 states on two key clean energy programs: net metering and interconnection procedures. Together these policies empower energy customers to use rooftop solar and other small-scale renewables to meet their own electricity needs. Now in its eighth year of publication, the report shows that over the past year, states nationwide have generally upheld and in some cases strengthened these pillars of consumer clean energy investment.

“Large majorities of Americans want to see a fast transition to renewable energy.  These are the policies that allow energy consumers to act on that desire,” said Vote Solar Executive Director Adam Browning. “With strong state renewable energy policy leading the way, entrepreneurs, businesses and customers are successfully transforming our nation’s energy landscape for the better. It’s heartening to see regulators nationwide – in red states and blue – stand strong for energy choice and solar progress by upholding these important policies.”

“Affordable clean energy is driving change and innovation in our nation’s electric sector, the likes of which have not been seen in more than a century. Freeing the Grid is intended to be the steady guide for state regulators and others who are working to navigate the changing utility landscape and unleash the benefits of local clean energy,” said IREC President and CEO Jane Weissman.

“Sound net metering and interconnection procedures are some of the primary state policies driving growth in the American clean energy story today. I hope to see Freeing the Grid used to spark productive policy discussion and sound regulatory decision-making that keeps the United States moving forward on clean energy,” said Carl Linvill, principal at the Regulatory Assistance Project (RAP), a global, non-profit team of experts that focuses on the long-term economic and environmental sustainability of the power and natural gas sectors.

Freeing the Grid is designed to help state policymakers, regulators, advocates and other stakeholders easily understand and improve the pillars of our new energy economy. The online resource includes best practices guidelines and an interactive map with state grades and recommendations. Freeing the Grid’s grading methodology was also adopted for use in the U.S. Department of Energy’s SunShot Initiative, which aims to reduce the cost of going solar by 75 percent before the end of the decade.