In response to our recent article, “What Happened to Southwest Wind Power?” the editors at Small Wind News received correspondence from Danita and Dayne Geyer of Bremmerton, Washington. Their story, while probably not unique, conveys the frustration and heartache of small wind turbine owners, left in the lurch by Southwest Windpower’s abrupt closure and sale of their popular Skystream line.  They are interested in connecting with other Skystream owners, for support and problem-solving.  Contact information for them is at the end of the story. 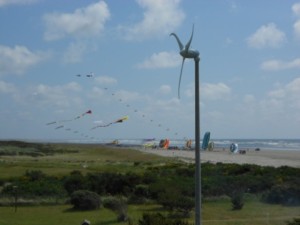 Danita and Dayne Geyer found out about Southwest Wind Power’s closure purely by accident when their turbine went into a stall over the 2012 Christmas holidays, possibly due to a series of severe wind gusts. They have a home in Graytown, on the coast of Washington State, and own a Skystream 3.7 wind turbine that was purchased in the spring of 2009 and supposed to be still under warranty. All through January and February they tried, to no avail, to get a local dealer/installer to help bring the tower down to service it.  They wanted to be sure to honor the terms of their 5-year warranty, which specified that only a certified Skystream technician could service the equipment.

Out of frustration, they searched online and got what they thought was a lead when they discovered that Primus Wind Power in Colorado had acquired a division of Southwest Wind Power. When Danita called Primus, lo and behold, the gentleman who answered the phone was a former Southwest employee and the same person who had graciously helped them in 2011 after their original inverter in the turbine head failed.  They explained their situation, and also sent him photos of the failed marine powder coating (which had cost them an additional $1000 when it was installed).  He immediately shipped them a refurbished turbine head as replacement.

Through their conversation with him, they learned that Primus did not acquire the Skystream division from Southwest, and that he himself had just learned of the company’s closure from an article in the Arizona Daily Sun.  When it folded, he said, it left a lot of his good friends surprised and out of work.

Through this contact, the Geyers got the names of a couple of reliable Skystream tech/dealers in Washington State.  (Unfortunately, they were located on the other side of the state nearly 800 miles away.)  When Danita called, she was startled to learn that these contacts had no idea that the company had closed.  One electrician/dealer in Spokane, WA was nearly in tears as he told her that he had sold more than a dozen Skystream turbines to friends and regular customers.  He had one customer who was waiting for repair parts and another customer who had just shipped their entire turbine head back to Southwest Wind Power for repair.  Danita said she “really felt bad for this man because his reputation as an electrician was at stake.”

Trying to make sense of the situation, Danita and Dayne eagerly read everything about Southwest Windpower in the Arizona Daily Sun. But efforts to reach the reporter, Joe Ferguson, were unsuccessful.

Eventually, they hired a renewable solar energy company to bring down their 33 1/2 foot tower and jumpstart their Skystream turbine with the help of a start-up kit, borrowed from a local former Skystream dealer.

Despite this mess, Danita and Dayne remain supporters of wind power.  “We have generated more than 8000 kilowatt hours of power in approximately 36 months of production.  So we know that wind power does work.”

The costs of their recent repairs wiped out two years of gains and they were left with a “profit” of $34.21 on their $17,000 dollar wind energy investment.  To make matters worse, they learned that they will need to re-powder coat the turbine this summer.  When they brought the tower down for the recent repair, they found that the powder coating is failing on this second turbine head as well as showing signs of rust, neither a good thing in a marine environment.

Danita and Dayne are interested in networking with other Skystream owners so that they can try to get or make needed parts and service their turbines. They are interested in exploring legal measures, as well as problem-solving and sharing information with other owners. They can be reached via email at [email protected] and request that anyone contacting them about this put “SKYSTREAM” in the subject line to avoid accidental deletion as spam.