The ninth annual Small Wind Conference drew attendees from around the states and around the globe to Stevens Point, Wisconsin in late June.  Other workshops and meetings preceded and followed the two-day conference, which is the key annual gathering for small wind industry professionals to share information and perspective.

Twenty-two sponsors and 13 exhibitors put their names and products in front of the conference attendees, promoting small wind electricity as a staple of renewable energy’s contribution to the world’s energy mix. 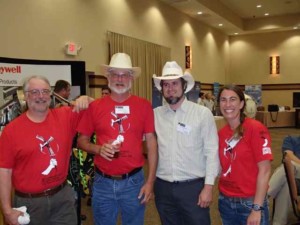 The conference opened with a social event in the exhibit hall, featuring conference exhibitors and sponsors, and their hardware. The highlight was a competition, during which teams of participants crafted a small wind creation, and then saw how their ideas stacked up against others. This year, participants were tasked with building a tower out of spaghetti, marshmallows, string and tape. Towers were judged not only on height, but were subjected to wind speeds until they failed. The hilarious results were an auspicious preview of the camaraderie of the group, amid the more serious networking that the conference offers.

Many regulars attended the conference, including Rich Bannen, who received a cowboy hard hat in recognition of his early registration habit and his own trademark hat. 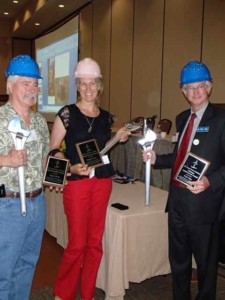 Conference newcomer Paul Gipe—the well-known wind journalist—was a very welcome addition to the sessions and networking, and the committee hopes he’ll become a regular at the SWC in the future. Mike Klemen—for many years a volunteer wind generator tester and now a commissioner for the Small Wind Certification Council—returned to the conference after a long absence.

Megan Amsler, of Cape & Islands Self-Reliance in Falmouth, Massachusetts was the conference keynote speaker, and also received the Small Wind Advocate of the Year Award. Megan has worked promoting wind and other renewables on Cape Cod for many years, and shared some of her struggles, strategies and vision with conference attendees.

Roger Dixon of Skylands Renewable Energy in New Jersey received the Small Wind Turbine Installer of the Year Award. In addition to hands-on installation work and project management, Roger has been involved in promoting incentives for wind in his home state of New Jersey. 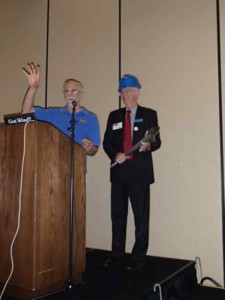 Paul Gipe received a lifetime achievement award from the conference, and was toasted and roasted by long-time colleague Mick Sagrillo. Gipe’s career has spanned several decades and a variety of roles in the industry, making an enormous contribution to the credibility of the industry, and honesty and accountability of manufacturers, agencies and dealers.  [See IREC’s interview of Gipe in our Winter 2013 issue. ]

Samantha Smart Merritt, the SWC’s hired project manager, worked tirelessly to make the conference run like clockwork. The SWC coordinating committee thanked Samantha for all that she did, out front and behind the scenes, including securing and taking care of sponsors and exhibitors, handling registration and attendee requests. They look forward to working with Samantha on next year’s conference, scheduled for June 17-18, 2014 in Stevens Point.