It was one of those stunningly gorgeous December mornings in Salt Lake where the snow was like glitter.  I met up

with Utah Clean Energy’s Sarah Baldwin at my new favorite coffee shop, so I could find out what’s happening with solar in Utah.  Quite a bit, I discovered (but wasn’t surprised).

The first graduating class of Salt Lake Community College’s Energy Management Course that ‘walked’ earlier in December.  Of the 10 who graduated, six already have jobs in the energy field.  Sarah said the SLCC course was modeled after the well-known course at Lane Community College in Eugene, Oregon.  “Roger Ebbage was a big help to us when we began to pitch this to SLCC some five years ago,” said Baldwin.

As Senior Policy and Regulatory Associate, Sara manages the Solar Salt Lake Partnership Project, a DOE program of its Solar America Communities Initiative.  In her spare time, Sara works on a number of key state-level regulatory and policy issues and co-directs the Utah Wind Power Campaign as part of the NREL Wind Powering America Program.   Yeah, she’s so not busy.

So…that little 2.6MW PV system on top of the Salt Palace…you know, the one that’s larger than the (current) largest PV rooftop system in the U.S. on the FedEx building in Woodbridge, New Jersey.  I can see that, right?

“Well, not yet,” said Sara.  Though they’re still waiting for the contract between Salt Lake County and Bella Energy to get inked, some of the other more important pieces have fallen into place (i.e., SB 1603).   Then there’s the matter of a procurement solicitation for equipment—some 11K solar PV panels will be needed. If all goes smoothly (does it ever?), it should be installed in Spring 2011.

Late last year, Utah (along with MA), scored an “A” grade in the 2010 Freeing the Grid, a national report card that defines best practices and ranks states on their support of net metering rules and interconnection procedures.  What’s even more remarkable is that in 2007, Utah’s grade was, well, let’s just say it was definitely south of an “A.” 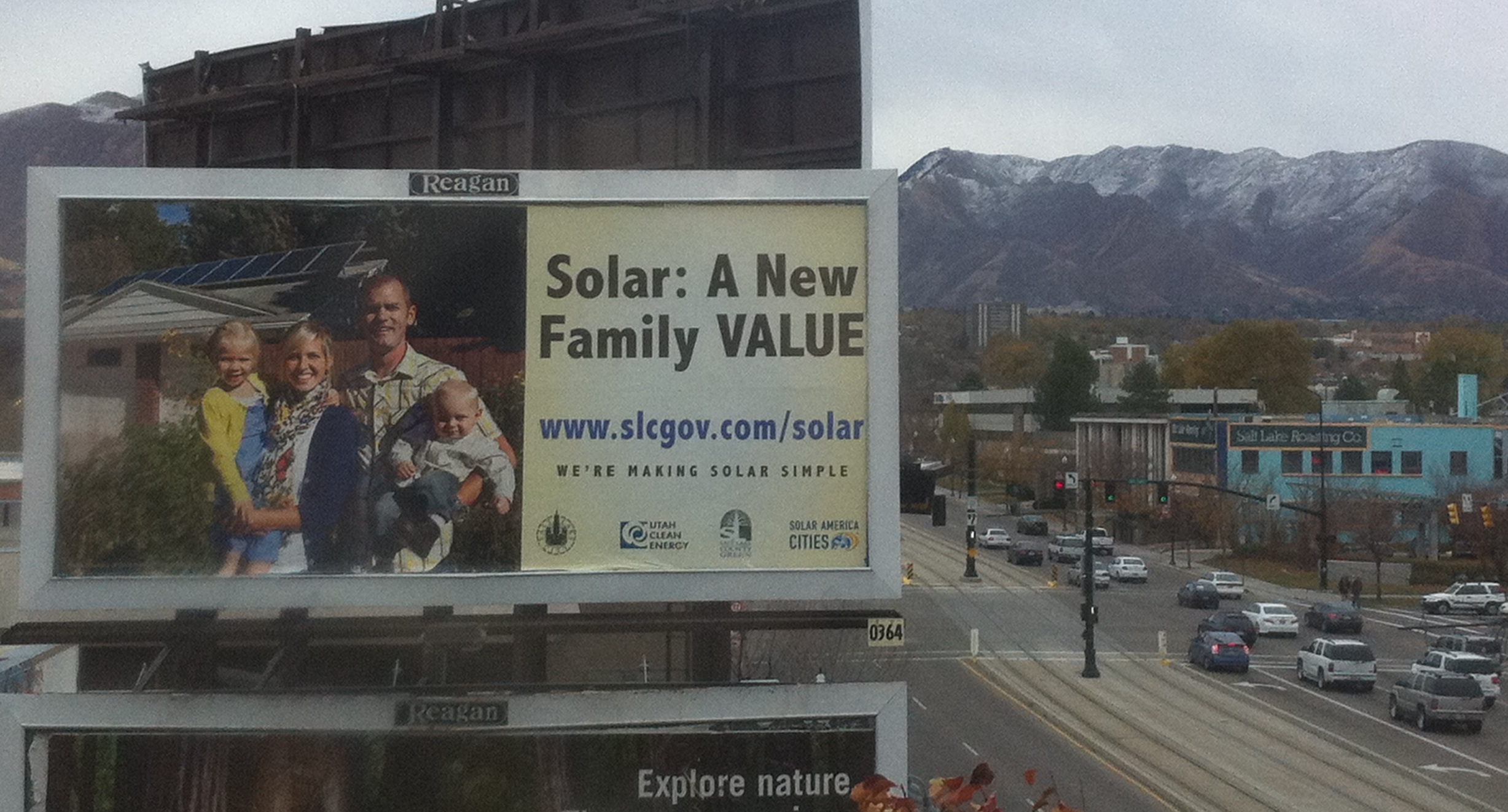 “Oops, sorry…they’re already down,” she said.  “There were 12 of them—six of both types, distributed throughout SLC and Salt Lake County along several major roadways, highways and high-traffic areas.  They were up for one month from October 14-November 14th.”

“The City set up a way to track traffic on its solar mapping website, which was featured on the billboards,” she said.  “And I do know that during the billboard campaign period, several new solar PV systems were added to the solar map on the website.”

Though the solar billboards have come down, and the installation on the Salt Palace isn’t up yet, I’m still returning to SLC this summer (camera in hand).  Watch for pictures.