Solar Markets in the U.S: big, booming, and oh so bright 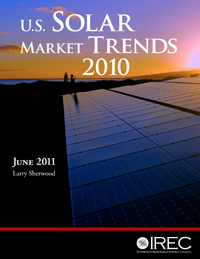 “The capacity of photovoltaic systems installed in 2010 is double what it was in  2009,” said Larry Sherwood, chief author of the annual report.  According to Sherwood, 2010 saw more than 124,000 new solar heating, cooling and solar electric installations, the majority of which were concentrated in a few states.

Growth in the photovoltaic utility sector was the most dramatic– the capacity of systems installed by utilities quadrupled in 2010. In addition, photovoltaic installations in both residential and commercial sectors grew by more than 60%.  “State renewable portfolio standards are a big reason for that huge growth in the utility sector,” said Sherwood, “and other state and federal incentives helped fuel the dramatic growth of solar installations on homes and businesses.”

California still ranks as the largest U.S. market, with some 28% of installed capacity completed in 2010, but faces some competition as other states embrace renewables. Arizona, Colorado, Massachusetts, Nevada, New Jersey, New Mexico, Pennsylvania and Texas made huge strides, at least doubling their installed photovoltaic capacity since 2009.

And despite being below the peak achieved in 2006, the capacity of solar pool heating installations increased by 13% in 2010, compared to 2009.

Two new concentrating solar power (CSP) plants were connected to the grid in 2010, with a combined capacity of 76 MW.  Most of this capacity was at a 75 MW Florida plant, the largest U.S. CSP installation since 1991.

Given the long-term extension of the federal solar investment tax credit (ITC), Sherwood is optimistic about solar’s continued growth.

“Besides the ITC,” he said,  “a deadline to start construction in 2011 to participate in the federal cash grant program will continue to spur market growth in 2011.”

Additionally, several companies have already announced plans for many large solar electric projects, including both PV and CSP projects.  According to Sherwood, some of these projects are under construction and will come on-line between 2011 and 2014.

You can read the full report here, on the IREC website.