On November 14th, The Solar Foundation (TSF), in partnership with BW Research and Cornell University, will officially release the 2012 National 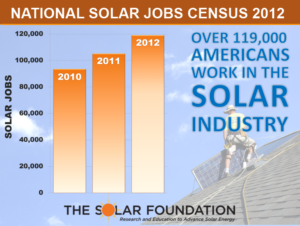 Solar Jobs Census at the 5th national Clean Energy Workforce Education Conference (CEWEC) in Albany. From the first CEWEC conference in 2006, IREC has chaired, planned and organized the CEWEC, and the New York State Energy Research Development Authority (NYSERDA) has generously funded it.

Ahead of the full report, TSF’s press release delivered some robust news: solar contributed more than 13K new solar jobs and 13% employment growth rate in the U.S. over the past 12 months.

The full report will also include 2013 employment projections and information on hiring trends.