Today, The Solar Foundation (TSF) released its interactive state solar jobs map for all 50 states. State solar employment figures (except for California, Arizona and Minnesota) were generated using thousands of data points from a combination of highly-respected sources, including The Solar Foundation’s National Solar Jobs Census 2013, the Solar Energy Industries Association’s National Solar Database, and other sources. According to TSF, these numbers are believed to be the most credible and up-to-date state-level jobs numbers in existence. 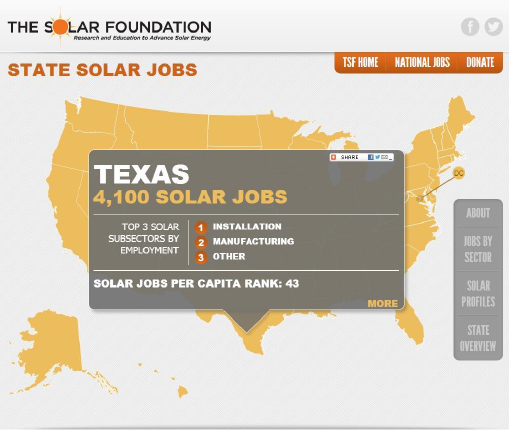 California, Arizona and Minnesota share the exact same Census methodology as the National Solar Jobs Census 2013, which was conducted by TSF and BW Research Partnership, with support from The George Washington University’s Solar Institute.

The national report, derived from data collected from more than 2,081 solar firms, measured employment growth in the solar industry between September 2012 and November 2013. The margin of error of this data set is +/- 1.3 percent, which is significantly lower than any similar national industry study.