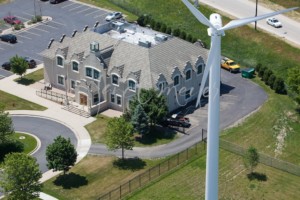 In just its first nine months of production, Milwaukee’s wind turbine, a Northern Power 100, is providing an environmental and economic benefit to Milwaukee. The generation of wind energy at the Port of Milwaukee is paying dividends to city taxpayers as the turbine on the grounds of the port administration building is producing significantly more electricity than the administration building requires.

The surplus electricity is sold for use by other utility customers. In the first nine months of operation, the wind turbine generated almost 45,000 kilowatt-hours of electricity more than the port administration facility used. Rather than paying the electric utility, the port received $5,395. When compared to the previous year, the port’s net electricity cost from February 22, 2012 through November 20, 2012 was down $14,683.

“This turbine is a demonstration of the city’s commitment to clean energy. It is the first wind energy system to power a Milwaukee city building with clean, renewable electricity. This installation is a benefit to both the environment and taxpayers of Milwaukee,” said Milwaukee Mayor Tom Barrett.

“This has proven to be a sensible, sustainable investment in green energy, and city residents are saving money,” Paul Vornholt, Port Operations Director said. “And, the wind turbine has become a landmark near Milwaukee’s Lake Michigan shoreline in our Bay View neighborhood.”

The City of Milwaukee’s Office of Environmental Sustainability installed the Northern Power 100 wind turbine in February 2012. The turbine was sited at the Port of Milwaukee on Milwaukee’s south shore because that location possesses one of the best wind profiles in southeastern Wisconsin. The installation and equipment was paid for, in large part, with an Energy Efficiency and Conservation Block Grant from the federal government, part of the American Recovery and Reinvestment Act. Additional support was received from Wisconsin’s Focus on Energy and We Energies.

The installations of Milwaukee’s wind turbine provided another economic benefit: local jobs. Vermont-based Northern Power manufactured the turbine, but the Office of Environmental Sustainability requested that they source parts and services from Wisconsin businesses. More than 10 state-based firms contributed to the construction and installation of the machine, including Bassett Mechanical (Kaukauna), which manufactured the tower and Kettle View Renewable Energy (Random Lake), which installed the tower and turbine. The two primary subcontractors were RL Davis (Milwaukee) and Arch Electric (Plymouth).

For more information, and to see live production data from the Milwaukee wind turbine visit the  website.