As I travel to cities across the country, I observe that new apartments, condominiums and mixed-use residential/commercial developments are cropping up around nearly every corner. In fact, multifamily housing is on the rise in most U.S. cities in response to population growth and economic development, and that trend is expected to continue for the foreseeable future.

Growing at a similar clip, residential solar installations on single family homes have soared, averaging a 68 percent annual growth rate for the last 10 years, resulting in a historic number of Americans reaping economic, environmental and societal benefits. Most multifamily dwellers and communities, however, are still unable to access energy powered by the sun.

It’s time to address the policy gaps that are eclipsing the solar opportunity for this growing sector of Americans. Many of the federal, state, and local policies that have helped to accelerate solar energy’s growth are targeted towards homeowners and taxable enterprises, and not available to renters and/or those who live in multi-unit residential housing. Additionally, renters and residents living in affordable multifamily housing that qualify as low- to moderate-income (LMI) are further restricted from accessing clean energy options due to additional financial, educational and other barriers. 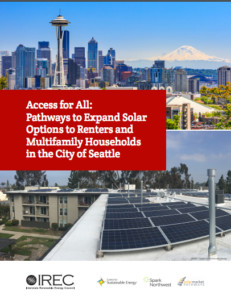 IREC is working with partners across the country to better address these policy gaps, and provide tools and resources to help more communities and states enable expanded solar access. A just published guide, Access for All: Pathways to Expand Solar Options to Renters and Multifamily Households in the City of Seattle, is designed to help diverse stakeholders better understand the various pathways to solar for multifamily housing. Designed for the City of Seattle, where apartments make up nearly 40 percent of occupied housing, and renters make up over 50 percent of the city’s residents, the guide provides greater clarity of the options in the hopes that Seattle (and other municipalities) will have the tools needed to enable a move in this direction.

While Seattle is widely recognized as a national leader in sustainability and climate action, there are still no clear policy pathways in place to allow residents of multifamily housing to access the benefits of clean energy. Seattle’s energy policies and incentives have helped city residents access clean, efficient and renewable energy resources, but current programs are largely geared towards single-family homeowners. Size-limited pilot community solar programs have only scratched the surface, relative to the potential.

Developed in partnership with Spark Northwest and the Center for Sustainable Energy, IREC’s guide outlines two potential pathways to enable greater solar access for renters and multifamily residents and LMI communities in Seattle:

With support from the U.S. Department of Energy SunShot Initiative Solar Market Pathways and the Bullitt Foundation, the guide supports the Spark Northwest efforts to work alongside local stakeholders to research, design and implement a pathway for affordable solar energy in Seattle.

Jennifer Grove, executive director of Spark Northwest, explains their approach: “By uniting our expertise in solar deployment with partner expertise in affordable housing development, we are demonstrating new ways to lower the energy burden and increase community (grid) resilience for those most in need.”

Just last week, Spark Northwest announced that three Capitol Hill Housing multifamily properties in Seattle, home to 147 low-income residents, will get rooftop solar power to generate their own electricity and reduce operating costs. Spark Northwest and Emerald Cities Seattle are working to install 1 MW of solar on multifamily rooftops by the end of June 2019.

As the cost of solar has fallen dramatically in the past decade, low-income households—especially those that reside in multifamily rental housing—have largely been left out of the clean energy economy. Ironic, since low-income households could benefit significantly from greater access. Those households are disproportionately affected by the rising cost of energy, paying up to four times the proportion of income on energy costs relative to their higher-income peers, according to the Bullitt Foundation.

Despite boasting some of the lowest electricity prices in the country, Seattle and Washington continue to see a large inequity in energy burden across income brackets. According to a 2016 American Council for an Energy-Efficient Economy (ACEEE) study, 23 percent of Seattle households surveyed had an energy burden twice that of the city median. With clean energy access, underserved communities could insulate themselves from rising utility costs, have the opportunity to build increased wealth, and help fight climate change.

This guide and surrounding work is connected to a related effort in California to increase uptake of solar on multifamily housing using the existing Virtual Net Metering Tariff, which has been available for years in the country’s leading solar market but has been vastly underutilized. Led by the Center for Sustainable Energy in partnership with IREC and the California Solar Energy Industries Association, the Virtual Net Metering Market Development Project is one of 15 Solar Market Pathways projects that aims to expand the awareness of policies aimed at bringing the benefits of solar to more multifamily housing, in California and beyond.

Shared solar, whether on-site or off-site, is a yet nascent model. It has the potential to transform the market, and the unique ability to empower the growing number of people, businesses, communities and states seeking to tap into the sun for their sustainable energy and transportation needs. We hope this guide will help them on their journey.