The GridMod Squad is a group of diverse experts well-versed in distribution system planning and national grid modernization efforts. 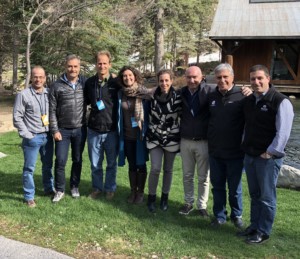 Recently, IREC Vice President-Regulatory Sara Baldwin and GridLab Executive Director Ric O’Connell co-led an invitation-only, intensive four-day work session for the group in Sundance, Utah, during which they tackled some of the more thorny questions around grid modernization and distribution planning.

Ultimately, their work will create new tools to help regulators and stakeholders make informed decisions on regulatory processes that support their emissions, cost and reliability goals.

Back in December 2018, the Energy Foundation, GridLab, IREC and America’s Power Plan met and laid the groundwork for the GridMod Squad. Their charge: to identify important distribution system planning and grid modernization concepts and develop a dynamic framework for action. Based on their experience with recent state grid mod proposals, the team will also define and distill best practices, strategies, and tools that enable positive, efficient and impactful grid modernization across the United States.

“From our discussions and strategy exercises, we coalesced around the need for a more explicit GridMod toolkit or playbook that will help regulators, advocates and other stakeholders (including utilities) develop better grid modernization and distribution plans and, more importantly, help them better evaluate these plans in the context of clean energy objectives,” said Baldwin. “The intent is that the playbook will reduce the clutter and confusion in the current GridMod world, and also minimize wasted time/energy on grid mod plans that do nothing to reduce carbon, optimize DERs on the grid or improve resiliency.”

The work of the GridMod Squad, a joint GridLab and IREC effort, will continue through 2019 with contributions from the team and peer reviewers.