Why are IREC and The Solar Foundation merging?

We are announcing the merger of two renowned clean energy organizations: The Solar Foundation and the Interstate Renewable Energy Council (IREC). As two accomplished clean energy nonprofits with similar missions and approaches, and longstanding mutual respect, IREC and The Solar Foundation saw an opportunity to significantly increase their reach and scope by joining forces as a single nonprofit.

This merger will roughly double the staff of the combined organization and quadruple the impact. It will allow the two organizations to pool resources and reduce administrative burdens to create a strengthened nonprofit that is greater than the sum of its parts.

The merger will also create an organization with expanded scope, dedicated to the accelerated growth of renewable energy and energy efficiency in ways that benefit everyone. In this critical decade for turning the tide on climate change, we believe that multiplying our impact in this way is in the best interest of both of our organizations and the broader clean energy community.

How will the new organization be different?

The main difference will be that we will be a larger team with greater operational efficiencies. All of the renowned programs led by IREC and The Solar Foundation, including federally funded programs, will continue to operate following the merger.

The merger increases the scope of both organizations. The Solar Foundation has historically focused exclusively on solar energy, as well as solar-compatible technologies like battery storage and electric vehicles. The merger with IREC will expand its focus to cover all renewable energy as well as energy efficiency. IREC has historically focused on distributed energy resources (customer-sited renewable energy), and the merger with The Solar Foundation will expand its focus to include large-scale renewables as well.

Tell me a little bit about IREC and The Solar Foundation.

The Solar Foundation was founded in 1977 and relaunched in its current form in 2010. It is the leading national nonprofit dedicated to accelerating adoption of solar energy and related technologies. Since its relaunch, The Solar Foundation has had a remarkable ten-year track record of leading cutting-edge research, education, and capacity building programs. Some of its well-known initiatives include SolSmart, the Solar Jobs Census, U.S. Solar Industry Diversity Study, Solar Ready Vets, and the Puerto Rican Solar Business Accelerator, to name just a few.

IREC has been trusted for its independent clean energy expertise for nearly 40 years, playing a critical role in building the foundation for rapid adoption of clean energy by tackling regulatory, workforce, and economic barriers. Since its founding in 1982, IREC’s state interventions and technical assistance have led to adoption of rules and policies in 42 states regarding interconnection, community solar, energy storage, and grid modernization. IREC’s policy guides, such as its Model Interconnection Procedures, have served as trusted tools for regulators and policymakers in nearly every state. IREC accreditation for clean energy training centers and training certification have supported clean energy deployment across the country.

What will the mission and vision of the combined organization be?

The combined organization will have the following mission and vision.

Mission: To build the foundation for rapid adoption of clean energy and energy efficiency to benefit people, the economy, and our planet.

Vision: A 100% clean energy future that is reliable, resilient, and equitable.

How will your programs change? Will you still provide the same services and resources I am familiar with?

While we are uniting as a single organization, all of the existing resources at IREC and The Solar Foundation will continue to operate uninterrupted, providing the same resources and quality of work. There will be new opportunities to increase the reach and effectiveness of existing programs.

How will the combined organization’s programs be structured?

The combined organization will have three key program areas: regulatory engagement, workforce development, and local initiatives (including permitting, code, and inspection issues). The chart below illustrates how existing projects and programs will fit under these three program areas: 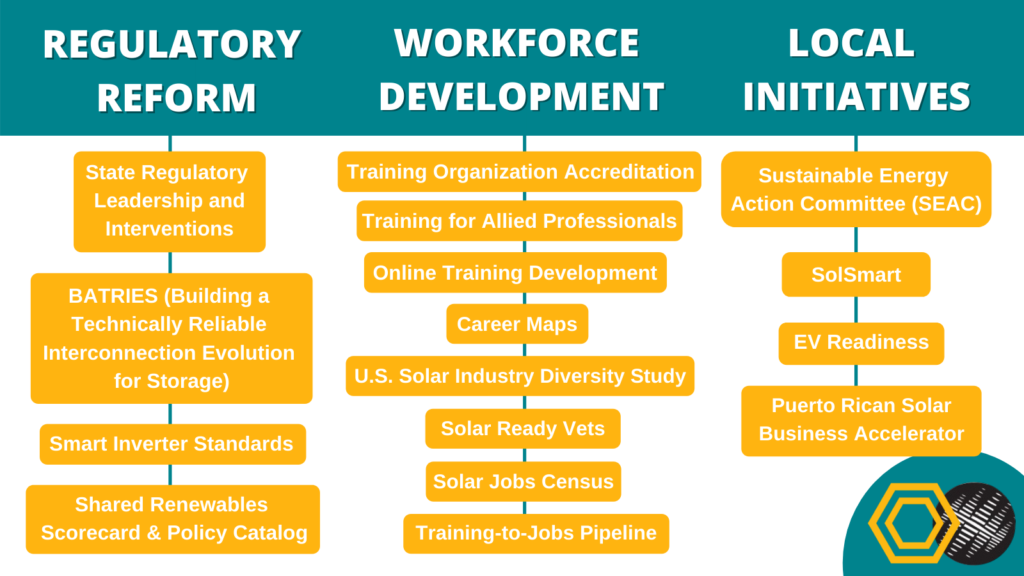 Where will the organization operate? Where will you have offices?

Following the merger, the organization will maintain offices in Washington, D.C. and Albany, New York. Many employees will work remotely across the country, including staff members in Puerto Rico.

What will the new organization be called?

Once the merger is finalized, all of The Solar Foundation’s programs will be combined at IREC. The Interstate Renewable Energy Council name will be maintained.

When will the merger take effect?

Over the coming months, the two organizations will work together to integrate their programs, with the merger anticipated to be completed in mid-2021.

Who will lead the organization after the merger?

Larry Sherwood, President and Chief Operating Officer of IREC, will remain in his position and lead the merged organization. Prior to the merger, which will be finalized in 2021, he will work with The Solar Foundation’s board to lead the organization as its new Administrator, effective on November 16.

To facilitate the merger discussions, Andrea Luecke, longstanding President and Executive Director of The Solar Foundation, voluntarily made a commitment in January 2020 to step down from her role following a successful merger agreement. Her distinguished tenure will conclude on November 15, at which point she will become a consultant to The Solar Foundation and further facilitate the integration of the two organizations.

Andrea has noted that she “couldn’t be happier to announce this timely and transformational strategic shift” after successfully leading The Solar Foundation since 2010. “I am extraordinarily proud of my achievements building The Solar Foundation from scratch, and creating, growing, and sustaining some of the solar industry’s most valuable and cutting-edge programs,” Luecke said. “After much searching, I am pleased to have found the perfect partner in IREC!”

Larry Sherwood added that “we are thrilled to join forces with The Solar Foundation and welcome a new chapter in our organization’s history—one that enables dramatically increased impact at a time when progress on clean energy has never been more important.”

I recently made a donation to The Solar Foundation or IREC. Will my contribution still make a difference?

Absolutely. All contributions will carry over to support the core programs at the combined organization. As a nonprofit 501(c)(3) charitable organization, we will continue to rely heavily on charitable contributions to ensure our success, and we are grateful to every individual or organization for your generous support.

If you are interested in making a tax-deductible donation at any time, visit The Solar Foundation or IREC to contribute. A donation will support the combined mission now and when the merger is official.

My company or organization has a partnership with IREC or The Solar Foundation. Will the partnership continue under the merger?

Absolutely. IREC and The Solar Foundation both have extensive partnerships in the clean energy industry, nonprofit organizations, local and state governments, and much more. These partnership agreements will continue under the merger and will be recognized under the combined organization’s website and other public forums. We are equally confident that the merger will open new opportunities for partnership and collaboration. If you’d like to get involved, contact The Solar Foundation at [email protected] or IREC at [email protected].

I have another question. How can I reach you?